While browsing in a bookstore in Philly called Brickbat Books, my partner handed me a booklet encased in a plastic sleeve. It was a 1952 manual titled, Sex Manual for Those Married or About to Be Written for the Layman by George Lombard Kelly and the foreword by Robert B. Greenblatt. The manual is the sixth edition with the original published in 1945. The manual was distributed by the Southern Medical Supply Company in Augusta, Georgia, and required a prescription when purchased. After wandering around the enchanting bookstore, my partner and I decided we could not leave without it. 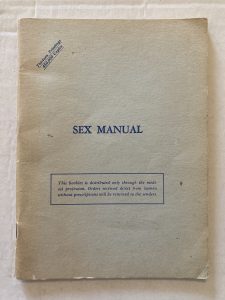 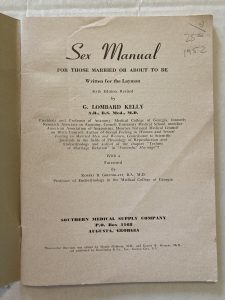 I use the terms marriage guides and sex manual interchangeably since the guide I purchased was meant for married couples and contained similar content. Both sex manuals and marriage guides possessed information “…concerning human anatomy, sexual technique, reproduction, [and] contraception.” (1) Sex manuals have a long history that can be linked to ancient history.

Nineteenth-century marriage guides teetered between illicit and medical publications and were described by historian Donna Dennis as “quasi-medical guides.” The 1850s saw a blur between obscene and acceptable forms of publication. The issue was whether publications on sex were meant for education/information reasons or erotica. Marriage guides were included in the discussion over appropriateness. Motives of publications were determined by “where something was printed, how the work was marketed and sold, and who made up its intended audience.” (2) For example, the 1870 brothel guide titled, The Gentleman’s Companion, has ads in the back for condoms, books, and venereal medicines. One of the books was titled Dr. Grove’s Marriage Guide. Though Dr. Grove’s Marriage Guide’s true purpose is hard to determine from afar since illicit publications were notorious for copying other forms of print to either mock legal print or attempt to be passed as other forms of print. Publishers of erotica made things complicated for science publishers, by advertising scientific books on sex alongside their publications of smut. Instead of making their work look reputable, it made the other works appear as though their intention was not educational. Regardless, the courts struggled with determining the true purpose of some publications. For example, Dr. Frederick Hollick was indicted in 1846 for his book The Origin of Life: A Popular Treatise on the Philosophy and Physiology of Reproduction and charged with libel. Hollick was found not guilty and was never indicted again for any of his works. Receiving legitimate information on sex was difficult throughout the nineteenth century and one could argue, still is. (3)

Historian Jessamyn Neuhaus analyzed how the language of marriage guides changed from the end of World War I to World War II in her article, “The Importance of Being Orgasmic: Sexuality, Gender, and Marital Sex Manuals in the United States, 1920-1963.” Post-World War I guides stressed the importance of a woman’s orgasm and made it the responsibility of the man for her climax and to “awaken” her sexuality. The guides argued that sex without the woman orgasming led her to become irritable and stressed. Ultimately, per the guides, intercourse was only successful if everyone orgasmed. Post-World War II guides argued something very differently and downplayed the importance of women orgasming. If a woman did not orgasm, the fault was with her and not her husband. The responsibility of what the manuals described as successful sex shifted from the husband to the wife. Neuhaus reminds us though that these guides did not reflect social values, but rather what the authors believed were proper sex practices and roles. (4)

The author, George Lombard Kelly was born in Augusta, GA on October 8, 1890, a Libra. After completing medical school Kelly became a research assistant in Ithaca, New York at Cornell University where he worked with Dr. George N. Papanicolau, who had developed the Pap smear Kelly returned to Augusta in 1927 and became an associate professor of anatomy at the University of Georgia. Kelly became the head of the department in 1929, acting dean in 1934, and dean in 1935. As dean, he was able to get the university accredited again in 1937 after it was revoked by the American Medical Association and the Association of American Medical Colleges in 1934.  In 1950, Kelly’s request to have the medical school become independent within the University of Georgia was approved and became the Medical College of Georgia with Kelly as president. Georgia then approved the construction of the Medical College of Georgia’s own hospital in 1951. Kelly retired in 1953 and became president emeritus. He worked in private practice until 1960 and then as a medical advisor in Colombia, South Carolina at the Veterans Administration office for several years. On October 24, 1972, George Lombard Kelly died of arteriosclerosis. (5)

Robert B. Greenblatt wrote the forward for the 1952 edition of the Sex Manual. He was born on October 12, 1906, another Libra, in Montreal, Canada. Greenblatt received his BA, MD, CM from McGill University. He joined the Medical College as a research fellow. During World War II, Greenblatt joined the navy and “helped eradicate granuloma inguinale among sailors’ families in Savannah and was one of the first U.S. scientists to investigate the effects of the atomic bomb dropped at Nagasaki, Japan.” (6) After the war, he returned to Medical College as a professor and chair of the first Department of Endocrinology. Greenblatt’s work consisted of:

…in 1950 the effectiveness of estrogens in managing menopause symptoms and developing in 1966 a monthly oral contraceptive pill, for which MCG received national attention. Greenblatt also made significant contributions to the diagnosis and management of hirsute women with polycystic ovaries and failure of menses. His group’s discovery in 1961 that clomiphene citrate could induce ovulation was a breakthrough in reproductive biology, and clomiphene citrate is today the first choice in treating ovulatory disorders. He also showed that the drug Danazol was useful in the management of endometriosis and fibrocystic breast disease. (7)

The 1952 Sex Manual, like the manuals that Neuhaus wrote on, was written within the framework of heteronormativity and was seemingly meant to dispel inaccurate information and taboos of the time that had been in circulation. Greenblatt wrote in the forward that Kelly “with a crusader’s zeal, has set for himself the task of bringing to the reader enlightenment on matters of sex.” He continued by stating that “In past years there have been so many taboos about sex instruction and the teaching of the facts of reproduction that marry men and particularly woman reach adulthood not only totally unprepared but actually troubled by fears, inhibitions and disillusionment about the fundamental life activities concerned with sex.” The guide contained medical knowledge and science that was compiled in hopes of combating sex myths. 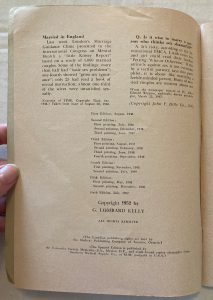 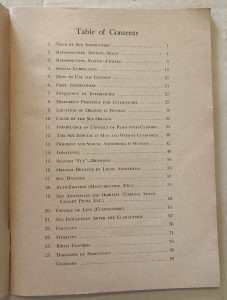