A couple of years ago, my brother gave me what appeared to be a reproduction of a nineteenth-century brothel token 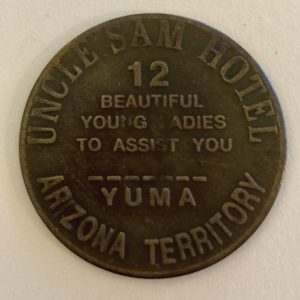 for my birthday. One side of the coin “All Night $3 Check” is engraved and the other side reads “Uncle Sam Hotel 12 Beautiful Young Ladies to Assist You Yuma Arizona Territory.” Further research of the coin sent me down a rabbit hole of what this token could potentially be. I checked out some collector’s websites, with one collector claiming they were told that brothel tokens did not exist in America. The information was not cited, and I have no background on brothels in the west; so I decided to pull back and look further into brothel tokens in America in general and begin building my knowledge around this token on a larger scale.

Scharding discussed the different ways in which brothel tokens were used, but overall it was to ensure that the cash and payment were in the hands of the madams/owners. Tokens were either purchased from the madam/owner or 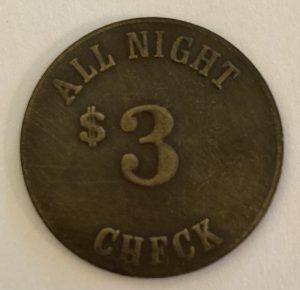 bartender and then given to the sex worker as payment. The sex worker would then return the token(s) to the madam for final payment for their services. Ultimately, brothel tokens were purchased and used in replace of money to ensure that the madame or the brothel owner retained control over the transaction. (2)

In addition to being used in replace of money, brothel tokens also acted as advertising tools for the brothels that they were linked to. Similar to other coins, brothel tokens moved through society, passing from person to person, informing individuals of the business on the coin. (3)

Although brothel tokens are incredibly rare, there is an abundance of brothel tokens that are available for purchase online that appear to be reproductions or the real thing. Some are quite crude and do not mince words, reading: “Good for One Screw.” The descriptive nature of the brothel token usually indicates that the object is entirely fake and made up, also known as fantasy coins. Fantasy coins are coins that reflect a fabricated history. Fantasy brothel tokens originated in the 1960s. Attracting those who were interested in the Wild West memorabilia. (4)

In addition to currency, archeologists have explained other uses for coins, copper pennies in particular. Used similarly to modern-day IUDs, “caps such as copper pennies, beeswax, citrus peel, and high-domed rubber were affixed to the cervix with a ‘glue’ of quinine or chinosol medicated fat or a salve of Vaseline” to prevent pregnancy. (5) The copper, as we know today, created an environment that was unconducive for the sperm’s survival and conception. (6)

I attempted to search for an Uncle Sam Hotel via GenealogyBank. I was only able to find a hotel that was in California in the 1870s. I did not dig very hard and was only limited to that newspaper website. So the question is: is the Uncle Sam Hotel brothel token fantasy or repro? I am assuming it is a fantasy coin. It is available to purchase on many websites and is one of the top tokens that pop up when I google “brothel token.” The accessibility makes me think it is fantasy rather than repro. Even though it may represent a fabricated history, it is still a fascinating item with an interesting history and is also a part of brothel and sex work history even though it is fantasy.