My partner and I attended the Vincent Van Gogh exhibit, Van Gogh: The Immersive Experience, at the Tower Theater in Philadelphia. We had no idea what to expect and did not know what else was included other than the projection show and even there we did not know how long it would be or if it was a show. All we had heard was that it was amazing from people we knew and reviews online. The reviews were all correct, it was a gorgeous experience held in a beautiful historical building.

The Tower Theater was constructed in 1927 and has had large musicians such as David Bowie, Peter Gabriel, Bruce Springsteen, Phil Collins, and many other well-known performers on its stage. Due to the seats and layout of the theater, the flooring was installed above the seats. The large space where the projection show occurred consisted of the stage. At one point in the show, my partner said he wanted to go to the other side of the room. As we got to the other side, he said “we are on the stage.”  On either side, I could see the ornate woodwork that framed the front of the stage.

“Success is sometimes the outcome of a whole string of failures.” -Vincent Van Gogh 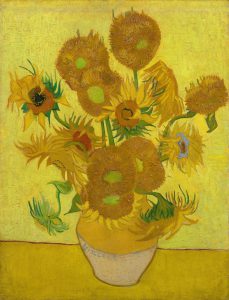 Before reaching the projection show that is seen on all the ads, we walked through an exhibit with some gorgeous installations that brought Van Gogh’s artwork to life. The exhibit also expanded on his life and other details of his life, including his tense friendship with Paul Gaugin.  The information built a background knowledge for the visitors. In addition to the history and art, quotes said by Van Gogh, that radiated his pain, his courage, and his passion brought Van Gogh’s voice into the exhibit. Learning more about Van Gogh and his struggles prepared the visitors for the projection show. 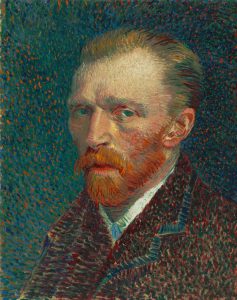 Walking down a small hallway that ended with a doorway covered by a curtain. Walking through the curtain, we were in a huge room lit up with images of Van Gogh’s paintings move across the walls and floor. The paintings took on a new and modern life and created a magical space that made me feel like I was in another world. As the paintings swirled around us, I felt an overwhelming feeling of wonder, awe, and sadness. Sadness that we tend to value the work of artists after they are gone. Gazing up at the large projections of Van Gogh’s self-portraits, all I could see was the melancholia that radiated from his eyes.

I always imagine how people of the past would react to exhibitions on them and that was definitely the case with this exhibit. Van Gogh struggled with poverty and endured so much pain which led to him taking his own life. I tried to envision him walking through the gallery rooms, reading the signage, and then experiencing the projection show. How would he have felt watching his art move across the room? What would he have thought? What would it have meant to him to see how much people value his work? I hope it would have brought him some joy.